With the World Cup now firmly in people’s minds, we’re hearing a lot of requests along the lines of “I want to go to the World Cup in Brazil but I’d like to take in a bit more of South America at the same time”. Specifically, we’re getting a lot of customers who would like to visit Machu Picchu prior to the 2014 World Cup but want to know the best way to travel from Lima to Rio. If time is tight but budget isn’t an issue then this a fairly straightforward request, but if you’d like a more interesting route, or need to save money for those World Cup final tickets… read on! 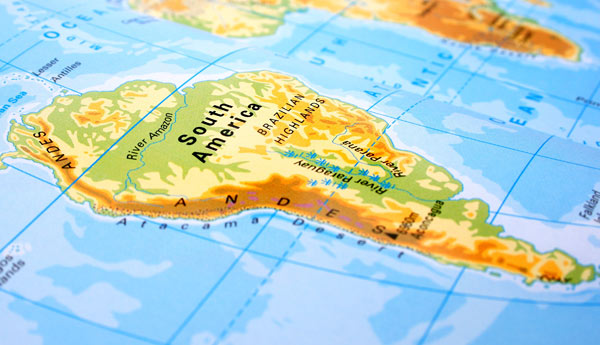 Just remember, South America is MUCH bigger than you think… 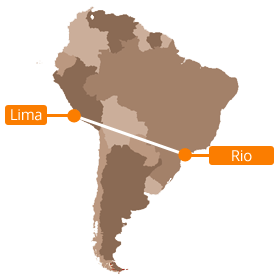 The simplest way to travel from Lima to Rio is, of course, by air. Direct flights operate daily between the two cities, and generally you can choose between TAM and Avianca. Flights are usually priced around £400+, but as with everything connected with the World Cup, those prices seem to be soaring, so don’t be surprised if that price doubles in the run-up to the World Cup

Stop off in Iguazu Falls (4 days) 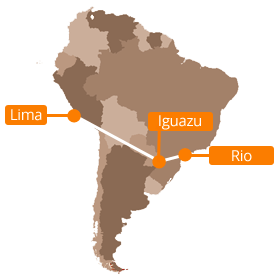 However, although the direct flight will whip you from Lima to Rio in under 5 hours, it does mean that your missing the chance to see some fantastic scenery as part of your holiday in South America. So why not break the journey with a stop to visit the fantastic Iguazu Falls on your way? LanPeru will be flying direct from Lima to Foz do Iguacu every day from March 2014, and you should allow a couple of days to visit both the Brazilian and Argentine sides of the Falls. Once you’ve thoroughly enjoyed Iguazu, from here it’s just a short flight or overnight coach journey on to Rio. You can also do the journey in the other direction but for some reason the flights are always more expensive going that way round. A one-way flight from Lima to Iguazu Falls usually comes in around £400, but this rises hugely during peak times.

Our final route might apply particularly to backpackers and long-term travellers, as it does require a fair bit of time (2-3 weeks as a rough guide), although it’s perfectly possible if you’ve got less time to spend but are keen to include all of the stops along the way! 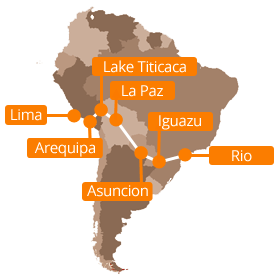 Setting off from Lima, you can travel down the coast of Peru by coach to the White City of Arequipa. Though you don’t have to spend more than a night here, it’s a lovely place so we do recommend doing some exploring (and perhaps visiting the amazing Colca Canyon?) before boarding your next coach up to Puno, on the shores of Lake Titicaca. A huge range of coach companies operate on both routes, but for our holidays in Peru we usually use the excellent Cruz del Sur. You can also fly from Lima to Arequipa and from Arequipa-Puno with either LanPeru or Avianca.

Lake Titicaca is absolutely stunning, and a great way to get the most out of it is to cross it by boat to the beautiful Isla del Sol on the Bolivian side of the lake. After staying overnight on the island, you can continue on to the Bolivian mainland to the capital La Paz. From here you can continue on to places like the Salar de Uyuni salt flats, or the lovely colonial town of Sucre, before heading to Santa Cruz in the Bolivian lowlands to catch a further coach on to your next destination: Asuncion in Paraguay. You can also fly direct from Santa Cruz to Asuncion with Amaszonas.

Asuncion always surprises and charms visitors but it won’t occupy too much of your time before catching a coach on to Ciudad del Este, just over the Rio Iguazu from both Argentina and Brazil. From here you can probably guess the next step – Brazil! More specifically Iguazu Falls, where you should definitely spend a couple of days having tours of both the Brazilian and Argentine sides of these spectacular waterfalls. When you’re ready to move on it’s just a quick flight to Rio for some time to relax on Copacabana beach before the World Cup party begins!

More ways to travel from Lima to Rio…

The possibilities are endless when travelling from Lima to Rio, but planning the trip can seem pretty daunting. Which is why we recommend enlisting the help of a tailor-made travel expert, who will be able to suggest a few options to suit your budget or time frame!

4 thoughts on “Road to the World Cup: Travel From Lima to Rio de Janeiro”