Peru is a country with a vast and interesting history, and Lima’s Museum of Art’s exclusive exhibition of objects from the Wari Castillo de Huarmey site promises to change our understanding of this ancient culture…

When you talk about Peruvian history, most people think of the Incas, but centuries before the Inca Empire, the Wari Culture ruled over huge swathes of what is now Peru, from the area around Chiclayo in the north down to the edges of the Atacama Desert in the south. In common with other Andean cultures, they left no written records, and although we have some fairly well-preserved ruins from their capital near modern Ayacucho, they have remained one of the least-understood of Peru’s pre-Inca cultures. Frustratingly this has been in large part because all the significant tombs found from the Wari culture were looted long before archaeologists got to them. 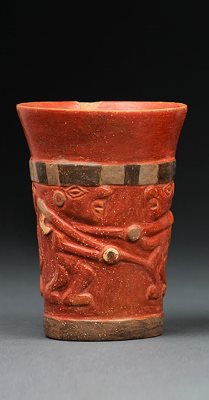 However, all that changed last year, when a team under Milosz Giersz from the University of Warsaw made what is probably the most significant archaeological discovery in Peru in the last 20 years. At the Castillo de Huarmey site, on the coast between Lima and Trujillo, on a ridge between two previously-looted Wari pyramids, they used aerial photography and geophysics technology to locate a deeply-buried mausoleum, and began digging the site in 2010. Ironically, the mausoleum had actually been protected by previous looters, who had dumped rubble taken from the pyramids to either side on top of the ridge, further burying the site.

After years of careful and secretive excavation, the team managed to recover over 1,000 artefacts and identified the remains of over 60 bodies, including three women of obviously high status who had been buried along with fabulous textiles, gold and silver jewellery and gold weaving tools. These three women were buried in separate small side chambers and have been described as Wari Queens. So if the Lord of Sipan burial is described as the “Tutankhamen of Peru”, are these noble ladies its Nefertitis?

Happily, you can now make your own mind up, at the newly-opened and utterly fabulous Castillo de Huarmey exhibition at MALI (Lima Art Museum). The quality of the exhibits is truly stunning, and all the more special because it includes items made from textiles and even wood, which normally would have totally decayed, but which was preserved by the sealed mausoleum. Many everyday objects for the Wari must have been made from these materials, but it’s so important to see that confirmed “in the flesh”. The colourful designs of the textiles and the intricate carvings on the wooden objects seem to prefigure Inca iconography in many respects, and archaeologists are already looking forward to being able to interpret them and finally shed a little more light on this previously enigmatic empire. 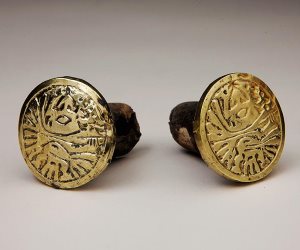 The Castillo de Huarmey exhibition will be on at MALI until the 7th of September (closed Mondays) and if you’re in Lima we HUGELY urge you to check it out. We can arrange a guide if you prefer or you can just get a taxi (the museum is just on the edge of Central Lima, as you come of the Via Expresa onto Plaza Grau) and just enjoy a wander around. It’s only a few blocks from the Parque de la Reserva, so if you visit in the late afternoon you could even combine it with a visit to the spectacular Magic Water Circuit in the evening. There are no plans that we’re aware of to open a visitor’s centre at the site itself, and archaeology is likely to continue there for several years, so the Castillo de Huarmey exhibition is the only game in town for the moment. However, we think it would be great to see a permanent museum on the site or nearby, similar to the Royal Tombs Museum in Lambayeque.