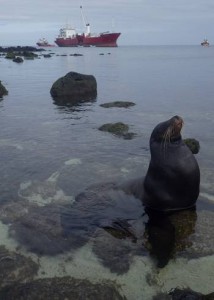 When the cargo ship Galapaface 1 ran aground in the aptly-named “Wreck Bay” on the island of San Cristobal earlier this year, experts feared a repeat of the 2001 disaster in the same harbour. Then, the oil tanker MV Jessica also ran aground, leaking thousands of gallons of fuel oil into the marine-rich waters of the Galapagos Islands.

In 2001, the seriousness of the oil leak and the apparent lack of proper contingency plans led to an environmental catastrophe, ironically in the very harbour in which Charles Darwin made his first landfall in the Galapagos back in 1835. It was estimated that 62% of the marine iguanas of San Cristobal was lost, with severe damage to other marine species as well. The captain of the Jessica was later jailed after admitting to “navigational errors” but many wondered whether lessons would actually be learned from the incident. 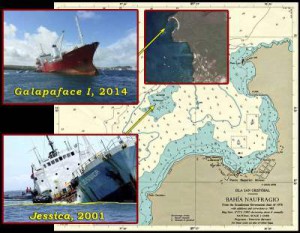 Happily, when the more recent accident occurred, new procedures were activated and an international team of salvage experts was flown into the Galapagos Islands. Given the damage done to the marine iguanas of San Cristobal by the previous accident, the experts’ first priority was to strip the Galapaface 1 of all pollutants and cargo, followed by any floatable materials such as plastics, furnishings, etc. They would then attempt to re-float the ship using specially-constructed flotation tanks.

There was some debate over the next stage of the plan, which was to tow the damaged but now floating ship away from the Galapagos and scuttle her in 2500m of open ocean. Many environmentalists opposed this action, but it was generally felt to be safer than risk towing the stricken vessel into a safe harbour on San Cristobal, with all the dangers that posed. The Galapaface 1 was finally towed out to her final resting place on July 15th, and the initial post-salvage study suggests that the marine iguanas of Wreck Bay have emerged from the latest incident without any negative effects. Well done to all involved in the salvage operation, although we really do think that perhaps oil tankers should steer clear of “Wreck Bay” in the future…