South American cuisine has gripped the UK’s food lovers over the last decade. With more and more Peruvian, Argentinian and Brazilian restaurants opening their doors, Latin American food has never been so widely available. If you enjoy eating out then you may well now have sampled ceviche from Peru, steak from Argentina, or even the delights of Brazilian BBQ. Although Colombia has rightfully developed a reputation as being one of the world’s finest coffee producers, unfortunately its cuisine hasn’t yet made its way to our tables. So to enjoy the best in Colombian food you’ll need to actually travel to Colombia itself, and here we look at what is waiting for you when you begin eating out in Colombia itself…

For its size Colombia is the most bio-diverse country on the planet and its food is influenced by the vast array of flora and fauna and each region has its own speciality. Each region draws from the different cultures that have inhabited them; from Spanish, African and even Asian food cultures, Colombian food is a melting pot of flavour. From the relatively mild Andean regions to the swelteringly hot Caribbean coast, Colombian food adapts to meet the climate in which it’s served. However, no matter where you’re eating out in Colombia, you can be sure to get Colombia’s most ubiquitous dish, arepas (a type of cornbread pancake) with every meal… 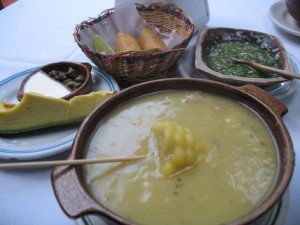 A common starter throughout Colombia are patacones which are twice fried slices of green plantain. Plantain is best described as a potatoey banana which is slightly starchy and sweet. patacones are best served with an aji sauce (a spicy sauce made from the aji amarillo chili) to dip it in. As well as being a delicious starter, patacones are also used as a side dish for many of the regional dishes of the coastal towns and cities.

Ajiaco is a Colombian specialty and it’s especially popular in the capital city of Bogota. Ajiaco is a warm, wholesome and comforting chicken soup made with corn on the cob and potatoes. The most import part of the soup is the potatoes called papas criollas which are similar to new potatoes. As the papas criollas dissolve they release there starchy goodness and act as a natural thickening agent. The soup is seasoned with a herb called guasacas and traditionally served with sliced avocado, capers and sour cream.

Yucca is a staple food throughout South America and Colombia is no different. These tasty little root vegetables are usually fried until golden brown and severed alongside many dishes. They taste remarkably like potato but a little firmer and have a very distinctive texture. They are generally cooked in oil and seasoned with plenty of salt and sometimes boiled or steamed but fried yucca is the way to go. 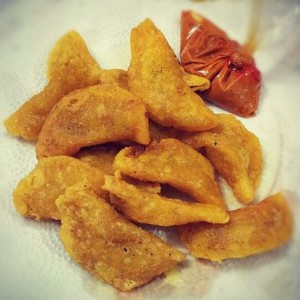 Colombia’s national dish the Bandeja Paisa, from the Paisa region, consists of a massive mixture of meat, beans, yucca or plantain crisps and egg. Usually the Bandeja (Literally meaning ‘flag’ in Spanish) comes packed full of steak, fried pork rinds, chorizo sausage, rice and red beans and to top it all off a fried egg and sliced avocado. This monstrous dish makes a full English look pretty wimpy, and sums up Colombia’s love of all things meaty, and much like many other South American countries, its lack of vegetables. Bandeja Paisa is a meat lover’s paradise and should only be taken on by people with BIG appetites, but you’ll find it just about everywhere when you’re eating out in Colombia.

Empanadas are Colombia’s go to snack. Served by restaurants and street vendors, they can be found all over the country. These little parcels of joy are stuffed bread or pastry containing a staggering number of different fillings. Originating from Portugal and Spain, Empanada comes from the Spanish word empanar, meaning to coat or wrap in bread. In Colombia empanadas can come baked or fried, but as with a lot of Colombian food, they’re generally fried. Fillings change depending on the region, for example, in Medellin the most popular filling is rich chorizo sausage, whilst the poorer areas enjoy empanadas filled with spinach and cheese.

A popular dish in the coastal regions of the north, and one of our favourites when we’re eating out in Colombia, is fried fish or chicken in a coconut sauce (Pollo en Salsa de Coco). The dish comes served on delicious coconut rice, fried plantain and hot sauce. Its most easily compared to a mild Thai curry: creamy, well-seasoned and best eaten outside on a hot day with a cold beer. Different meats are used depending on where you are, in the inland regions of the north is common to see fresh water catfish used in place of the sea fish you’d find on the coast. 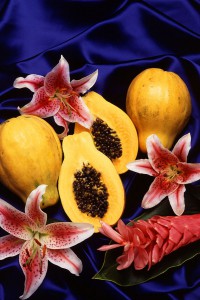 Next up is fruit, because to be quite frank Colombian deserts aren’t anything to particularly write home about. However, what definitely will be worth mentioning on your postcards home are the amazing fruits available throughout the entire country. Fruit from your local supermarket or greengrocer doesn’t even begin to compare with the fruit you can enjoy when eating out in Colombia. The country has the perfect environment for growing sweet, tangy, tropical fruit and it’s readily available for sale on almost all street corners, whether just as fruit or juiced in a smoothie. Some fruits particularly worth keeping your eye open for are:

The tamarillo: a sour and sweet little fruit which name translates to tree tomato. These lovely bite-sized fruits come in two forms, the red fruit which is slightly sour and a little bitter, or yellow-orange ones which are much sweeter and have a similar taste to passion fruit. These little babies are a great snack to enjoy whilst walking and the perfect fruit to refresh your pallet after enjoying a meaty dinner…

There’s an old Colombian saying ‘don’t give papaya’ (which basically means don’t flaunt your belongings in the streets if you want to stay safe), despite this you’ll often find yourself being given papaya in Colombia. It can even sometimes be served in a set lunch for a starter and is also used in place of ‘Say Cheese’ when taking photos.

So whether you’re snacking on the street or enjoying a full bandeja paisa you can be sure that eating out in Colombia will be a pleasure, and you’re also likely to find that it’s pleasingly kind to your wallet as well. Now, altogether… “Papaya!”