The Central Train Service from Lima to Huancayo is one of Peru’s real undiscovered treats, and until the pesky Chinese completed the railway from Beijing to Lhasa, it was the highest-altitude passenger railway in the world. The steep climb from Lima’s historic Desemparados station up through the Mantaro Valley to Huancayo showcases some truly spectacular scenery, and it’s a fantastic journey. Frustratingly, however, there are only a few departures a year for passengers on what is primarily a freight line, and we’ve been waiting for months for the 2015 Peru Central Train Service timetable to be released by the Ferrocarril Central de Andes company.

You can get a flavour of some of the route from these YouTube videos:

Happily, the 2015 Central Train Service timetable has finally been released, so here are the dates for your diary. In both directions (ie: Lima to Huancayo and Huancayo to Lima) the trains depart at 7am, arriving at approximately 8pm – lunch is served on-board and there are several stops along the way: 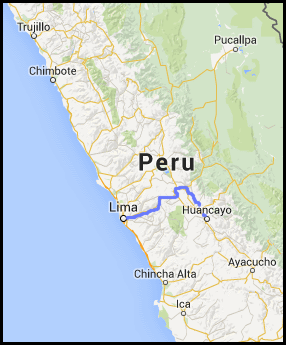 As you can see, there’s no apparent rhyme or reason to the Central Train service timetable, which is why we’ve just had to wait for the confirmed schedule to come out before arranging any rail journeys from Lima to Huancayo for 2015. In fact this timetable is still provisional in some ways – the dates marked with an (*) may change depending on whether the Peruvian government declares extended bank holidays on those weekends. Our feeling is that they probably will, but that the departure dates will just change by a day in that case, so it’s just a question of building in an extra day into your itinerary to allow for that.

It’s also worth noting that you don’t have to travel by train in both directions. Particularly if you want to spend less time in Huancayo (although we’d hugely recommend at least visiting the Ocopa monastery, if only for the stupendous early-modern library) then you can always get the train up to Huancayo and then get a first-class coach back down to Lima. It’s a much quicker journey by road these days, albeit also less interesting!

So if you’re a train buff or just like the idea of getting off the beaten track, then the Central Train service is a fantastic addition to any holiday to Peru: so long as your dates fit the timetable, of course. Tickets in the rather more comfortable “tourist” class start from about £70 one-way, so it’s not going to add hugely to your costs. And it will also give you a chance to visit somewhere that most visitors to Peru don’t get to see, without taking up huge amounts of time or money: what’s not to like?